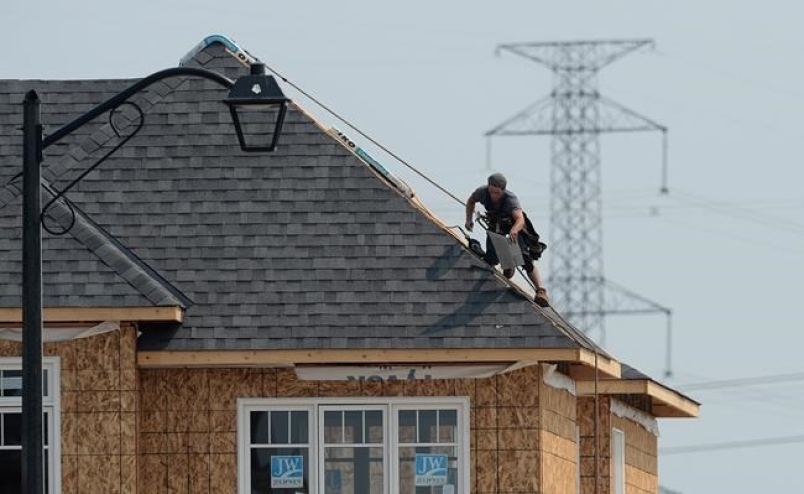 A construction worker shingles the roof of a new home in a development in Ottawa on Monday, July 6, 2015. A federal housing agency is setting an aspirational goal of providing every Canadian with an affordable home by 2030 in a plan that lays out a path of experimentation to make it happen. THE CANADIAN PRESS/Sean Kilpatrick

"We believe that everyone in Canada deserves a home that they can afford and that meets their needs. We also believe that we are in the best position to make that happen," Evan Siddall, the corporation's president, writes in an opening message in the document. "We are single-minded in striving toward this goal and it will guide our work in the coming years."

An estimated 1.6 million Canadian households are considered in "core housing need," meaning that people live in places that are too expensive for them or that aren't really suitable for them.

The plan says hitting the mark will also require removing barriers to housing based on gender, race, sexual orientation and gender identity.

The corporation had talked about the target with stakeholders for months as it took the lead on delivering most of the money in the federal government's 10-year, $40-billion housing strategy. It aims, in part, to create at least 100,000 new housing units by 2028 for low- and middle-income households.

While the plan has received a mostly warm welcome from anti-homelessness and housing advocates, there are also some concerns that 100,000 new units spread over 10 years won't be enough to reach the 2030 goal or help those in the greatest need.

"One of the weaknesses, I think, in the thinking here is trying to do too many things for too many people with too little resources," said Tim Richter, president of the Canadian Alliance to End Homelessness.

"I honestly don't see how targeting affordable housing for middle-income Canadians makes any sense. I understand affordability challenges for middle income Canadians ... but from an affordable-housing perspective, they really have to prioritize their investment to those in the greatest need first if they want to achieve the goals that they have set out."

Over the next year, the federal housing corporation plans to give out some $2.4 billion in loans and funding as part of the strategy and to build 8,300 units, including 3,800 rental units, and repair 15,000 more.

And it is also promising to hand out at least $100 million over three years to try new affordable-housing models through three large-scale experiments — either regional or national — and track how well other ideas are performing.

Exactly how the money will work is unclear, but the Liberals have shown a penchant for wanting to find new ways to fund and deliver affordable housing as part of a grander scheme to reduce homelessness nationwide.

They're about two weeks from delivering their last budget before this fall's general election and Finance Minister Bill Morneau has hinted his budget will include measures meant to help make home ownership more affordable, particularly for young people.

Liberals, Conservatives and New Democrats have been testing housing policies that could make it into their campaign platforms and a common theme is making it easier to buy first houses or condominiums. The ideas have included benefits or credits targeted at specific groups more at risk of being unable to afford their housing, and pumping up spending on existing housing programs.